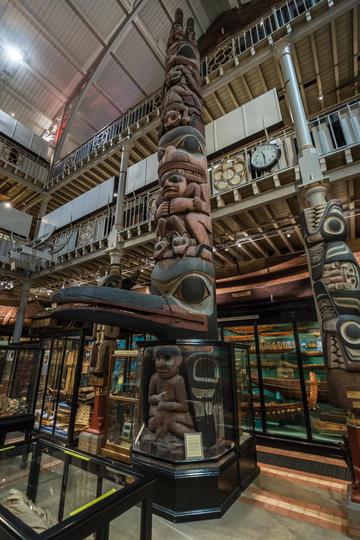 Are you 15-19 years old, interested in drama or art and would like to work with internationally renowned filmmaker, totem pole carver and Haida artist Gwaii Edenshaw and Flintlock Theatre?

Join us for a weekend looking at Haida objects in the Pitt Rivers Museum collections, looking at our own communities and how they relate to the wider world and asking " Decolonisation... are we nearly there yet?"

Culminating in sessions aimed at kick-starting independent creative projects for participants, the Sovereign Nation Masterclass weekend offers a unique opportunity to get to know the Pitt Rivers collections from the perspective of an originating community, to work alongside professional artists and to learn more about our colonial past and its contemporary legacy. Led by Flintlock Theatre and Gwaii Edenshaw and hosted by Pitt Rivers Museum (Friday event) and Cherwell School (Saturday & Sunday workshops).

What is Sovereign Nation?

Sovereign Nation is part of New Conversations, a programme funded and delivered by the British Council, Farnham Maltings, and the High Commission of Canada with additional support from the Arts Council England. It is a partnership between the Pitt Rivers Museum, Flintlock Theatre and Gwaii Edenshaw, an indigenous artist from the Haida nation. Sovereign Nation centres on the Star House Pole - a Haida totem pole which has been the Museum's centrepiece since 1901.