In 2017 the Museum bought three new pieces of artwork by the celebrated Australian artist Christian Thompson, from his series Museum of Others. These were purchased with the assistance of the Arts Council England/Victoria Artist Christian Thompson and Albert Museum Purchase Grant Fund and The Friends of the Pitt Rivers Museum. These artworks complement an earlier work Desert Melon (2012) which was gifted by the artist.

Why did the Museum buy them?

In 2010 Christian Thompson became one of the first two Indigenous Australian students to study at the University of Oxford. During his DPhil at the Ruskin School of Art, Thompson was invited by Dr Chris Morton, a curator at the Museum, to engage with its collection of photographs from Australia and to make an exhibition in response. The resulting exhibition We Bury Our Own (2012) was a great success. A website and video about this exhibition are available here. Thompson has continued to draw inspiration from the Museum's collections and histories, and the series Museum of Others (2016) (two of which are exhibited), critically engages with the Museum's history and those who were significant in the development of its Oceania collections. 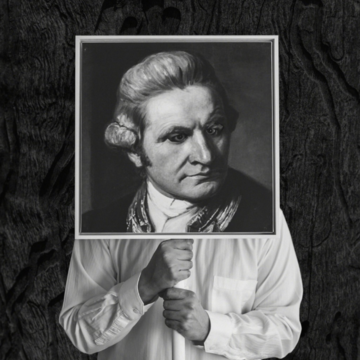 'Othering the Explorer, James Cook' from the series Museum of Others (2016)

In this work, artist Christian Thompson makes a mask from a portrait of the famous explorer of Australia, Captain James Cook (1728-1779) and looks out from eyeholes cut through it. Thompson steps inside the subject of the portrait, asking "how did you divide up and classify your world?" and in so doing, inverts the colonial gaze of his subject, looking through the past to view an entirely different present. This artwork is particularly significant, given the display of objects collected during Cook's voyages in Oceania which are in the Museum collections. 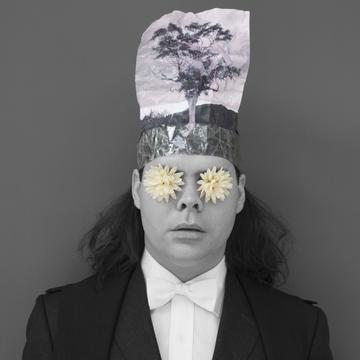 This artwork was made by Thompson in response to the Pitt Rivers Museum's historic photograph collections. He has created an image that evokes how Australian Aboriginal people were photographed in the colonial period, but that also connects to his own identity and that of Aboriginal people today. Thompson was one of the first Indigenous Australian students at the University of Oxford and in the image he wears subfusc - the formal wear of Oxford students. The flowers over his eyes suggest notions of healing and positive energy, and his headdress bears a picture of a ghost gum tree (Corymbia aparrerinja), a species with great spiritual significance found in Bidjara country that was also made famous in the work of celebrated Aboriginal artist Albert Namatjira. 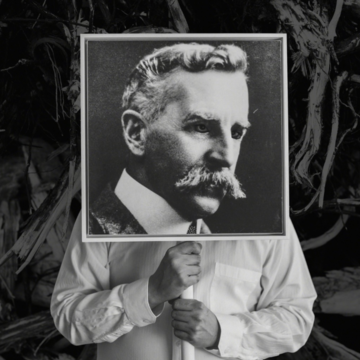 'Othering the Anthropologist, Walter Baldwin Spencer' from the series Museum of Others (2016)

In this work, artist Christian Thompson makes a mask from a portrait of the influential anthropologist of Australia, Sir Walter Baldwin Spencer (1860-1929) and looks out from eyeholes cut through it. Thompson steps inside the subject of the portrait, asking "how did you divide up and classify your world?" and in so doing, inverts the colonial gaze of his subject, looking through the past to view an entirely different present. This artwork is significant because Spencer donated many objects from Australia to the Pitt Rivers Museum.

What has this display replaced? 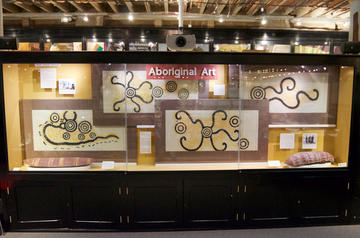 The Australian art display on the Lower Gallery consists of three cases, and the new acquisitions occupy the central case. The display used to contain paintings of ground art made by the anthropologist Walter Baldwin Spencer and donated to the Museum in 1903, along with a photograph of Spencer and other expedition members. Spencer's paintings are of considerable historical interest since they document designs made in the ground at the Wollungua totemic ceremony of the Warumungu people of Northern Territory, which Spencer witnessed. These paintings have now gone back into storage where they will be accessible for researchers, but where the long term storage conditions for old works on paper is better. The Museum's permanent displays have always been refreshed periodically to reflect new acquisitions or to enhance the conservation of objects. However, the main reason for installing this new display was to replace artworks by a European observer of Indigenous Australian art from more than 100 years ago with some more recent artwork by an Indigenous person. Most of the artwork in the Australian art displays was made in the recent past with many of the Arnhem Land paintings created in the 1980s. It is important to remind our audiences that being an Indigenous artist today can mean many things -  you might live in a remote location and make artworks that reference more 'traditional' styles, or you might live in an urban centre such as Melbourne and make digital art. All of this artwork reflects the extreme diversity of Indigenous experience today, which is relected in the diversity of art production. The Clore Learning Balcony, where the Australian Art display is located, is the Museum's main space for education sessions. It is therefore an ideal location to discuss with students the issues that Christian Thompson's work raises, such as Indigenous Australian identity, colonialism, representation, museum history and many other themes.

Since 2017, the Museum has collaborated with another celebrated Indigenous Australian artist, Brook Andrew, who completed doctoral studies in Fine Art at the University, supervised by Dr Christopher Morton and Dr Iain Kiaer.

Brook's research on the dendroglyph (carved tree section) on display on the Lower Gallery led to an artwork based upon it being presented by him at the 22nd Biennale of Sydney, for which Brook acted as Creative Director. The artwork incorporates a 1:1 scale 3D printed version of the tree section.

Dr Brook Andrew and Dr Morton are continuing their collaboration on the provenance and future of this object. 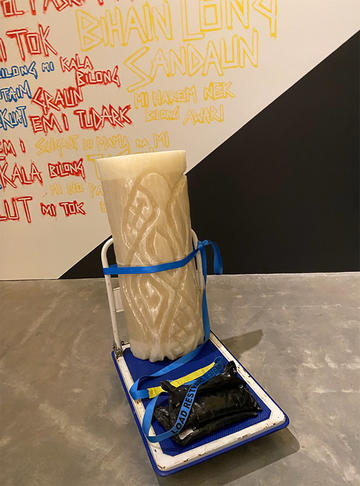 Globalization, Photography, and Race: the Circulation and Return of Aboriginal Photographs in Europe, 2011-2015 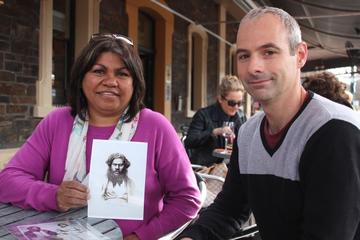 The project explored the global circulation of photographs of Australian Aboriginal people that began in the 1840s, and their central role within the emergence of modern views regarding race and history. It investigated the significance of colonial photography to Indigenous communities, and through international collaboration returns photographs currently housed in four key European collections to descendants, providing an important Indigenous heritage resource.

The Pitt Rivers Museum cares for one of the most significant collections of nineteenth photography of Australian Aboriginal people, including what is probably the earliest portrait of an indigenous person from South Australia, known as Tenberry (pictured), taken sometime before his death in 1855. As part of this research project the Pitt Rivers Museum’s Curator of Photograph Collections (Dr Chris Morton) traveled to Australia in 2013 to meet indigenous communities represented in the collections in Oxford, establishing new relationships and returning copies of historic photographs.

The project had two primary aims:

1. To explore the global circulation of photographs of Australian Aboriginal people that began in the 1840s, charting their central role within the major shift in Western visual culture from Enlightenment humanism to the emergence of modern views regarding race and history. Through international collaboration with key European museums, it set out to connect their local production to their concrete effects as objects circulated through commercial, governmental, scientific and private visual networks that spanned the world.

2. To return photographs currently housed in Europe to their subjects’ descendants, providing a major Indigenous heritage resource. In doing so it intended to explore the significance of colonial photography to Indigenous descendants and contribute to resolving the momentous and complex intersection of new digital technologies and Aboriginal cultural traditions regarding visual imagery. The project sought to produce a range of scholarly and popular histories, including a significant digital tool, available here.

The collaborating European curators and institutions were:

The project built on an earlier research project at Monash University led by Jane Lydon and Lynette Russell, Aboriginal Visual Histories: Photographing Indigenous Australians, which ran from 2008-2011. See here for more information on that project.