On display, high up in the Museum court, are two figures from Japan. They stand just over 1m tall, have small horns, red skin and only four digits on each hand and foot. The figures were bequeathed to the collection in 1964 by Miss Lucy Margaret Eyre, and are thought to date from around 1800. They are examples of oni – figures from Japanese folklore that often take the form of demons or devils. Research suggests that these specific figures may represent the oni Zenki and Goki from the Shugendō sect of Japanese Buddhism. 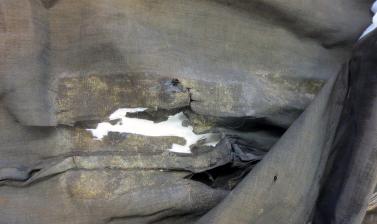 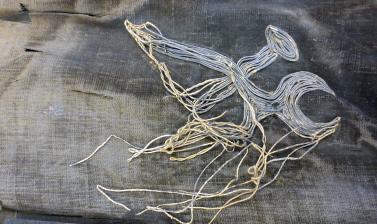 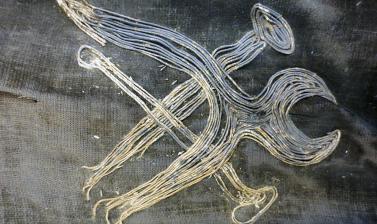 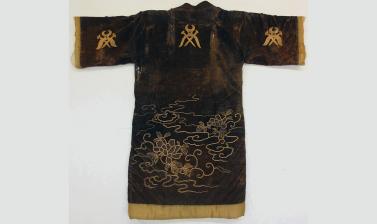 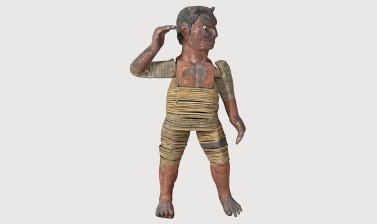 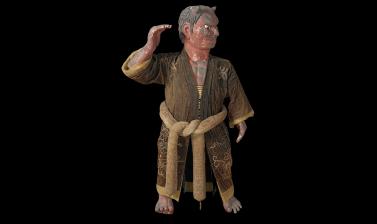 One figure is clothed in a long brown velvet kimono, embroidered with a design representing nails and pincers, with a thick belt tied around the waist. The figures themselves are carved from wood coated with a thick gesso layer (animal glue mixed with powdered chalk) and painted. The head and limbs are detachable and slot into a wooden frame bound with split cane. They are very finely made with modelled detail such as tendons, veins and wrinkled skin. The figures had probably been on display since the 1960s and were removed during work to improve the display case. Due to the difficulty in gaining access to the case in the past, very little was known about their history, construction and condition.

When the oni were removed from display, closer inspection quickly showed numerous problems. The paint layer was peeling and brittle, with the underlying gesso layer cracked and lifting from the wood. The lifting layers suggest that the underlying wood had shrunk over time, forcing the gesso to lift away from the surface. These areas were gradually softened with purified water, allowing them to be repositioned, and the peeling paint later to once again lie flat.

The kimono was very fragile, with considerable damage. The silk cuffs and hem were badly deteriorated, with cotton-wool padding showing through large holes. Embroidered threads had become detached and entangled, making the original design very hard to interpret. In places, the velvet fabric was extremely thin and had lost large areas of pile.

There were many long tears, small holes and damaged areas where a support fabric had been glued in place with shellac. This resin was often used in museums for repairs to objects in the past but is no longer used. These old repairs were themselves causing more damage, as the shellac was now very hard and brittle, with the weak fabric tearing around the edges of the repairs.

Loose embroidered threads were untangled and secured to the velvet with fine silk thread, following the original pattern and allowing the design to be visible again.

The brittle shellac repairs were removed using a solvent, drawn through the fabric with a vacuum to prevent staining. Removing the shellac returned the flexibility to the velvet, but exposed the old damage. A thin silk was adhered across the back of these areas to return some strength and support to the fabric. This follows the same idea as the old repairs, with the difference being the use of conservation grade 'archival materials.' In this case the adhesive used in place of the shellac will stay flexible and remain easy to remove in the future. Also, by using light silk fabric, very little weight is added and therefore less strain is placed on the weak velvet.

Before the figure was returned to display, a simple cotton liner was made to sit under the kimono using a pattern made from the original. Not only will this provide a protective barrier from the abrasive paint layer on the figure, it will also provide support to the fragile velvet.

Over 50 hours of conservation work were carried out on one of the two figures and over 140 hours spent specifically on the kimono, before the clothed figure was stable enough to be redisplayed.