The temple of Lord Jagannath in Puri, in the Indian state of Orissa, is a famous Hindu temple and an important pilgrimage destination. There are three main template deities, viewed collectively as manifestations of different aspects of Krishna and given equal respect and worship. Jagannath, the Lord of the Universe, represents the energy of the universal creation. He is depicted with dark blue or black skin. His older borther, Balarama or Balabhadra, is a manifestation of eternity and knowledge, and is shown with fair skin. Subhadra, the younger sister, is the Protector of the Universe, and her image is painted yellow.

Metal braid of Balabhadra (1894.28.3) before conservation 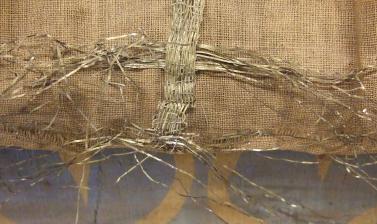 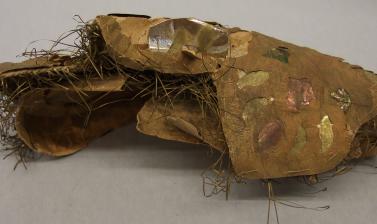 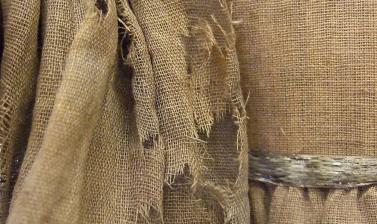 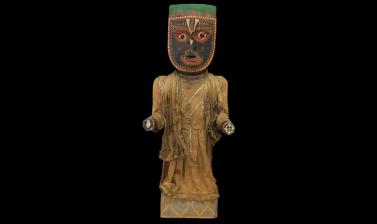 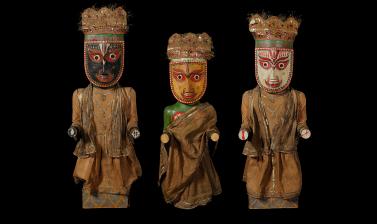 The figures of the gods remain in the temple for most of the year, but in the rainy season (June or July), they are installed in huge chariots and pulled through the streets of Puri to another temple, allowing the public to have Darshan ('a holy view') of the deities as they pass. It is from the huge chariots carrying Jaganath and his siblings that the English word 'Juggernaut' originates.

The figures of the three gods in the Jaggannath Temple in Puri are unusual because they are made of painted wood rather than marble or metal. This is because the original image of Jagannath was carved, on the instructions of Krishna, from a log found washed up on the seashore at Puri. Representations of the gods can be bought from the temple, which is where the figures on display at the Pitt Rivers were purchased in 1894.

Once selected for display, the condition of the three figures was assessed. The figures themselves were in good condition, but their clothing and paper crowns had become fragile and torn. The male figures wear robes and a scarf, while Subahdra is dressed in a sari – all are decorated along the edges with metal braid. The cotton fabric of the robes had become brittle due to light damage, and the weight of the metal braid along the edges was causing it to tear. The braid itself was made from narrow strips of metal woven together with a fine silk thread. The silk thread had been lost in many areas over the years, releasing all the strips of metal, which had become tangled together.

The first task was to support the tears in the fabric of the robes, which was done using a fine silk fabric adhered around the edges of the tears on the reverse of the robes – the fabric was too fragile to stitch through. The decision was made to remove the sari from the figure of Subhadra to allow the conservation work to be carried out more easily. The original method of fastening and draping the sari was documented before it was taken off to allow it to be replaced correctly. The metal braid was rewoven using a fine polyester thread. This was a very painstaking process, but allowed us to approximate the original appearance of the braid.

The figures' crowns were made of paper, decorated with cut-outs filled with metallic paper, and fringed with metal tinsel. The paper was brittle and required humidification before the crowns could be reshaped to fit the figures. Much of the structure of the cut-out decoration had been damaged and required extensive repair; the team backed fragile areas with Japanese paper for support. The tinsel was cleaned and straightened.