'These dresses being made of the rarest productions of their island, and of the surroudning sea, and being wrought with the greatest care and ingenuity, must of course bear a very considerable value among them.'

–George Forster, A Voyage Around the World, 1777

This Tahitian Mourner's Costume was discovered on Captain Cook's second voyage of discovery (1772–5). Reinhold and Geroge Forster, father and son, who were the naturalists on this voyage, gave it to the University of Oxford in 1776 as part of a much larger collection. 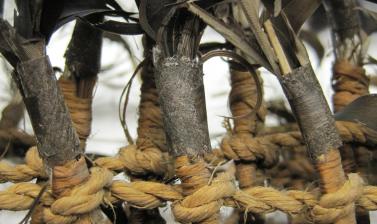 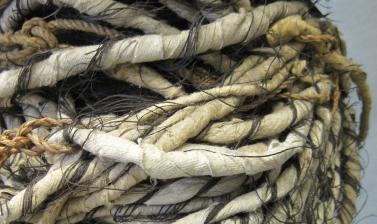 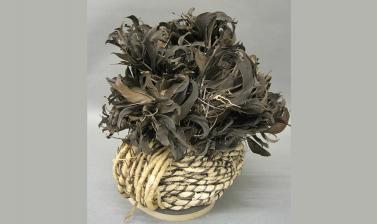 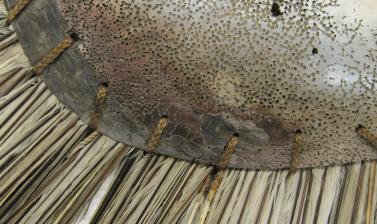 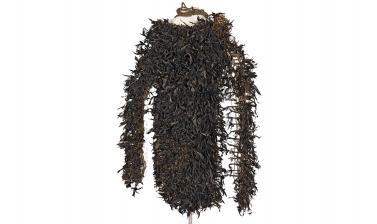 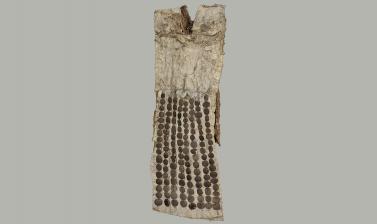 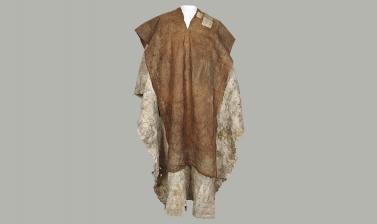 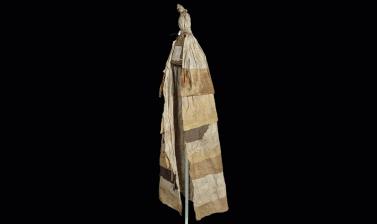 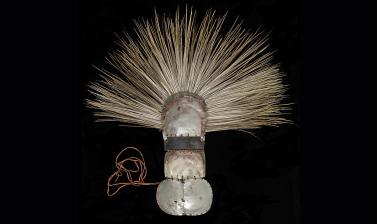 A costume such as this was worn when someone of high social status on Tahiti, such as a chief of one of the districts, died. The costume was worn by the Chief Mourner, who – accompanied by a group of assistants, their bodies blackened with charcoal – roamed through the district. Announcing his arrival with clappers made from pearlshell, the Chief Mourner could kill or maim anyone who didn't get out of his way quickly enough, as he carried a sword edged with sharks' teeth.

The costume is made up of many parts, and would have taken many people weeks to construct. It was made of valuable materials, some of which were restricted to those of chiefly rank, who were descended from the gods.

The most important parts of the costume are the mask and breastplate. The mask allows the identity of the wearer to be hidden, allowing him, or possibly her, to take on the persona of the Chief Mourner.

The pearlshells that make up the mask, and which are cut into thousands of slivers to make the apron, were exotic goods traded from the Tuamotu islands, each one having the value of a pig. The tropicbird feathers that edge the mask were valuable beacuse they were difficult to obtain.

The feather cloak of the costume was very fragile, having suffered from numerous moth infestations over the years. The cloak is made from small bundles of feathers tied, like the rungs of a ladder, into a structure made from coconut fibre cord. Each bundle of feathers needed to be reinforced at the base, and this was done using strips of synthetic tissue tinted with acrylic paints to match the colour of the feathers. The strips were wrapped tightly around the bases of the feather bundles, and a small strip of archival pressure sensitve tape was used to secure it.

The bindings of the headdress are made from many metres of coconut fibre cord wrapped in barkcloth and wound with several strands of plaited hair. Hair was an important component of the Chief Mourner's costume, as the head is very tapu (sacred) in Polynesian culture. Due to past insect infestations, the strands of braided hair had been eaten through in many places, cutting the strands into much shorter lengths, which had come unwound from the bindings.

A tiny spot of archival adhesive was used to secure the ends of each piece of braided hair to the underlying barkcloth. Once this had been done along the lengths of the bindings (over 12 metres in total, which took 120 hours), the bindings could be retied, using contemporary illustrations and descriptions of mourner's costumes as a guide.

Much of the rest of the costume is made from barkcloth, in various forms. Barkcloth was made by beating out the bark of various kinds of tree, such as the paper mulberry, until it was thin and flexible. The barkcloth was torn in many places, partly because the mount on which the costume was displayed for many years did not support the costume properly. Previous attempts to reinforce the damaged areas involved stitching nylon netting over the tears. These repairs were not sympathetic to the paper-like nature of barkcloth, and were removed. The old repairs were replaced with small strips of Japanese tissue, a handmade paper with long fibres giving strength, which were adhered over the torn areas using a starch paste adhesive.

The other components of the costume, including the apron made from slivers of pearlshell and the apron decorated with discs made from coconut shells, also needed conservation work.

A new mounting system will be designed for the costume to make sure that it is supported properly when on display, and that no stresses are put on any part of it.

The conservation of the complete costume took 220 hours.