Pigeon Whistles: An Orchestra in Flight

Pigeon Whistles: An Orchestra in Flight

Pigeon whistles (also known as pigeon flutes) are small, lightweight whistles which are carried on the tail-feathers of pigeons to create a beautiful haunting sound in flight. Traditional uses range from deterring predators to creating tactical diversion within warfare. They are also, of course, used for the enjoyment of their sound.

As Embedded Composer in Residence at the Pitt Rivers Museum and Oxford Contemporary Music in 2016, it was Nathaniel Mann’s remit to respond to the collections housed at the Museum. Exploring the galleries, Nathaniel was intrigued by a small display in the Museum Court: ‘Perched in three small vitrines, which themselves sit high above the other cases of the Court, small, strange bamboo faces peer down upon the Museum’s visitors. Appearing almost like tiny masks, these objects are described as pigeon whistles from China.’ They were the only instruments he could not imagine the sound of....

Nathaniel set out on a journey to hear the sound for himself, and to share it with others. He devised a work that involved homing pigeons carrying music across the country. An enormous spatial composition which ascended and dissipated, trailing a scattered chord above rooftops before resolving as the individual notes regather at their home lofts. He just needed a few collaborators....

The sound of pigeon whistles describes the birds’ flight, their paths drawn in sound across the sky above the audience’s heads. A music of infinite variation as the undulation of the wing, acceleration, wind speed, direction and flocking patterns are all manifested through sound.

Pigeon whistles create a spatial listening experience quite unlike any other phenomenon – with multiple sound sources continually moving in relation to the listener, sometimes rising up so far into the sky that the birds ‘pin out’ (appear as small as pin heads before vanishing from view). A tension is created as the birds disappear both from hearing and vision with the listener left in the knowledge that the music continues beyond their perception.

Pigeon whistle, being a type of Aeolian flute; when attached to a flying bird, it formed part of an aerial orchestra. Made of gourd, this example comes from China, having been collected in the late nineteenth century by Alfred Wingate, and for display is mounted on a stuffed pigeon. (Copyright Pitt Rivers Museum, University of Oxford. Accession Number: 1921.36.14)

‘Pigeon Pete’ (Peter Petravicius) is a retired miner/steeple jack/factory worker from Nottingham, with over fifty years of experience as a pigeon-fancier. He is, to the best of our knowledge, the only man in the UK who trains his birds to return to a mobile pigeon loft – a rabbit hutch which he straps to the back of his scooter on fishing trips. (Copyright Nathaniel Mann)

The polka dot pigeon loft. Pete trains his birds to recognise their mobile pigeon loft from the air: ‘For this purpose we decorated our pigeon loft with a distinctive black with white polka dots design.’ (Copyright Nathaniel Mann) 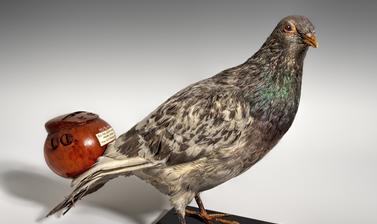 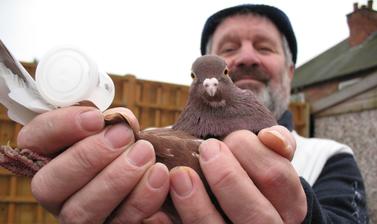 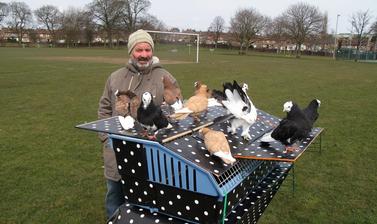 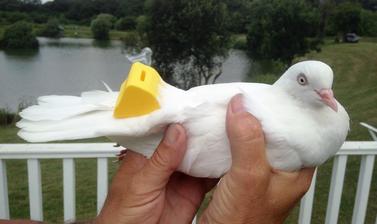 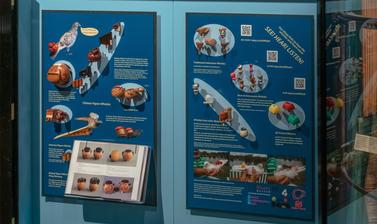 Pigeon Whistles was developed under the Embedded Residency Programme. It was premiered within Oxford Contemporary Music’s ‘Audible Forces’ exhibition on Hove Beach as part of the Brighton International Festival in May 2013. It was subsequently presented at a further six arts festivals across the UK. In 2015, the project was awarded the George Butterworth Prize for Composition. In 2017, Sara Jane Hall produced a BBC Radio 4 documentary about the project.

You can listen to BBC radio programme ‘The Pigeon Whistles’ (originally broadcast on BBC Radio 4 on 3 September 2017), produced by Sara Jane Hall, which features Nathaniel Mann and Peter Petravicius (‘Pigeon Pete’) in conversation about pigeons, pigeon whistles and their collaboration together, online here (BBC).