The material culture of Tibet has been sought, collected and studied in the West since the middle of the nineteenth century. Often construed as valuable and exotic ‘art’ or ‘antiques’, it has since entered museum collections and art markets in large quantities. British museum collections of Tibetan material expanded greatly in the early twentieth century following the extensive looting that occurred during the Younghusband ‘Mission’ to Tibet of 1903–4. Thereafter, anthropologists, missionaries, explorers and other visitors to Tibet continued the process of removing items they believed could explain its mysteries and its religion. Thousands of Tibetan objects are therefore now stored in museums around the world, but Tibetans often lack access to them and the opportunity to interpret them in their own terms. The display Tibetan Objects in Transition arose from the perceived need to insert contemporary Tibetan voices, narratives and perspectives into museum space(s).

This case display is an experiment in creating a ‘Tibetan’ mode of displaying material culture which emphasises contemporary Tibetan voices, narratives and perspectives. Drawing from the Pitt Rivers Museum’s collections, as well as objects loaned by members of the Tibetan community in the UK, it is underpinned by the idea of transition, in terms of the material culture and people of Tibet. Like some Tibetan people, Tibetan objects have been ‘displaced’ from their original settings and acquired new meanings over the course of their journeys. Here, these displaced objects and narratives have been reunited with Tibet, personified through the figure of Senmo: the mythological female progenitor of the Tibetan people.

Senmo, the Supine Demoness of Tibet

The image underpinning this display depicts the Senmo – a traditional female representation of the Tibetan landscape. She is depicted pinned down by Buddhist temples at thirteen key locations on her body: four in the inner realm (shoulders and hips), four at the border areas (knees and elbows), four at the borders beyond (hands and feet), and one at the centre (heart). For Tibetans, this geomantic map symbolizes the superimposition of Buddhism over the demoness’s power. The image also relates to shifts in Tibetan political organisation, from a loose tribal confederacy to a large and sophisticated empire that spread into Central Asia during the Yarlung Dynasty in the seventh to ninth centuries CE.

Slingshot (Tibetan: hurtog). Loaned by Sedhar Chozam, resident of Oxford: ‘Traditionally slingshots were used by Tibetan shepherds and nomads to protect their herds from wolves, but it was also used as a safety-rope to tie around the waist of young children like myself during their escape from Tibet in the 1960s. So this became a common precautionary measure to protect the children while navigating the treacherous Himalayan landscape.’ (Copyright Pitt Rivers Museum, University of Oxford)

Thupten Kelsang discussing the display with teenage members of the UK’s Tibetan community during a public engagement event, ‘My Tibet Museum’, held at the Pitt Rivers Museum in October 2018. (Copyright Pitt Rivers Museum, University of Oxford) 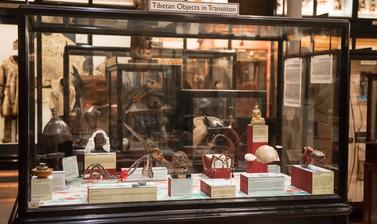 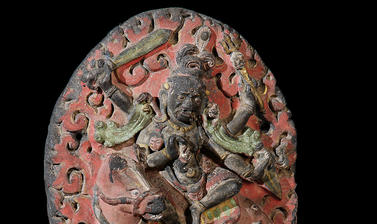 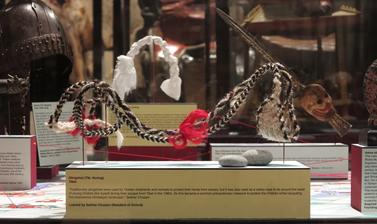 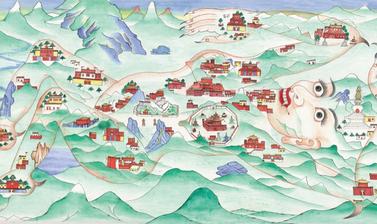 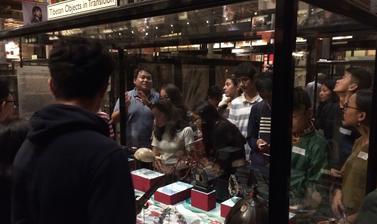