These beaded skirts were made by young Iraqw women in north-central Tanzania in Africa. Although the two skirts were made more than fifty years apart, they are stylistically similar, demonstrating a continuation in Iraqw leatherwork and beadwork traditions. Such skirts are worn wrapped around a woman’s waist. The combination of the thick hide and the numerous beads make the skirts extremely heavy, some examples weighing as much as 15 kilograms.

Iraqw skirts are amongst the most elaborately decorated textiles from eastern Africa. Each skirt is unique, the design being a product of the skill of the individual maker and the resources available. Typically, the skirts consist of four panels made from cow- or goat-hide, with thousands of beads attached using lazy stitch to create the characteristic long bands and geometric motifs. In historic examples, the beads are usually white, red, blue and black, with some yellow; those made in later decades incorporate other colours, such as light blue and green. Although a number of anthropologists have attempted to understand the significance of the colours and symbolism of the motifs, any precise meanings they may have remain unknown to outsiders.

The skirts were made by young girls as part of the Iraqw women’s initiation ritual known as Marmo. Through participation in Marmo, Iraqw girls transitioned from puberty to womanhood. During the ceremony, girls were secluded from the wider community for up to a year, being cared for by the elder women. The girls were taught songs and word games, as well as sexual manners. They also embroidered the leather capes, with which they had entered seclusion, with their own individual beadwork designs, thus turning them into elaborately decorated skirts like the ones on display that demonstrated their skill and dexterity. The girls were also circumcised. For the Iraqw, circumcision was a rite of purification, performed so that when the girls emerged from seclusion – wearing their colourful skirts – they were considered to be reborn with a new innocence and dignity, ready for married life.

As a result of a political struggle between the leader of the ritual specialists and Michael Ahho, a chief appointed by the British colonial authorities who was also a Christian, Marmo was banned in the 1930s. Despite the enormous political, economic and cultural changes that have affected Tanzanian society up to and beyond indepence in 1961, it appears that the ritual may have continued to be practised into the 1970s at least. Moreover, it appears that some elements of Marmo, including the singing of the songs at ceremonies and the making and wearing of beaded skirts, have been maintained by Iraqw women to the present day.

Campaigners against female genital mutilation (FGM) have argued that circumcision is a violation of women’s rights, particularly where it is practised on young girls. Such campaigners have had only limited success in eastern Africa, however, where circumcision is still widely practised amongst many groups, including the Iraqw, for whom the custom has profound cultural and social importance.

Beaded hide skirt with hide tassels. The skirt was made prior to 1940 and would have been worn during the Marmo ritual initiating young Iraqw girls into womanhood. (Copyright Pitt Rivers Museum, University of Oxford. Accession Number: 1940.7.0114) 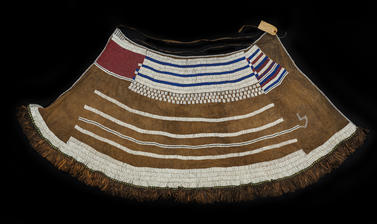 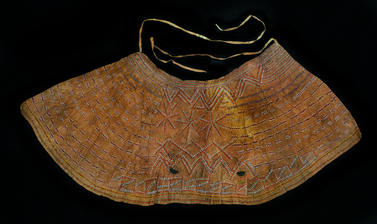 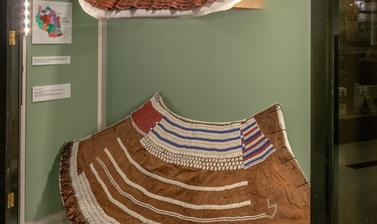