Travels in Finland and Bosnia-Herzegovina

This case display presents a selection of twenty-three drawings, sketches and photographs by the archaeologist Sir Arthur J. Evans (1851–1941). Probably best known for excavating the ancient site of Knossos in Crete, Arthur Evans was encouraged in his education by his father and travelled widely as a young man. Among his earliest adventures, made while still an undergraduate at Oxford, was a trip to Finnish Lapland with two friends in the summer of 1873. Setting off from England in early August, the party sailed along the Swedish coast as far as Tornio on the border with Finland, there transferring to an overland route and working their way northwards, on foot and by canoe, to Lake Inari in the Arctic Circle. Hiring local guides to pole their vessels up the rapids, the three Englishmen experienced ‘a country of tame reindeer’, as Evans recorded it in his journal, and ‘a people who evidently love ornament and colour’. The photographs taken by Evans, and more particularly his lively drawings of the Finnish and Saami settlements where they stayed, exhibit the wide-eyed excitement of youth and provide a visual narrative of the journey. Evans returned home with memories and some objects, and an interest in northern peoples, but never again put to paper anything more on the remarkable voyage.

Also highlighted are various drawings and ink sketches made by Arthur Evans while travelling with his brother through Bosnia and Herzegovina in 1875. These show places and people encountered on a route south from Agram (present-day Zagreb) – via Tešanj, Sarajevo and Mostar – to Ragusa (Dubrovnik), traversing a region which at the time was suffering considerable unrest. The illustrations demonstrate a particular interest in physiognomy and dress, Evans writing concurrently, for example, of Turks, of Southern Slavs and the ‘beauty of the Croatian peasant costume’. Undertaken primarily as an aide-mémoire, the drawings subsequently provided the basis for engravings published in his account of the journey, Through Bosnia and the Herzegóvina on Foot during the Insurrection, August and September 1875 (1876), whose success brought about a second edition, exhibited here, the following year.

Displayed alongside Evans’ own drawings and photographs is a selection of related material collected by him. This includes sixteen cartes de visite showing portraits of Saami people by studios in Norway and Sweden, including those of Marcus Selmer (Bergen), Rosalie Sjöman (Stockholm) and Jørgen Wickstrøm (Tromsø); four lithographs depicting scenes of everyday life in Swedish Lapland; and a Saami spoon made of carved reindeer antler. Also included are four cartes de visite by the Ignacy Krieger studio (Krakow); and four photographs of Russian ‘types’ by Wiliam Carrick (St Petersburg). The majority of Sir Arthur Evans’ archive is held by the Ashmolean Museum of Art and Archaeology, where for many years he was Keeper. This collection, being principally ethnographic, was donated to the Pitt Rivers Museum by Joan Evans, biographer and half-sister of the archaeologist, in 1941.

Portrait of a Saami girl. ‘This is a delightful little family’, Arthur Evans wrote of his hosts at Lake Inari in Finnish Lapland. ‘There is a little girl of 3 in a Lapp cap & blue tunic with the usual blue stripes about it; & a little boy of 5 who recited his A.B.C. for our edification. The children both have flaxen har & blueish eyes, as among Finns & Swedes.’ Drawing by Arthur Evans. September 1873. (Copyright Pitt Rivers Museum, University of Oxford. Accession Number: 1941.8.97)

Interior of a disused church at Sodankylä, described by Arthur Evans in his diary: ‘The Lapp church is a fit representation of a departed people. The picturesque, weather-stained timber can hardly hold together much longer, & the carved wooden pinnacles which surmount the roof look as if they must topple over [...] In the middle stands a bier, covered by a pall, and which from its look has been wasting away there for years. The pulpit is neatly carved, & there are all kinds of quaint wooden arches about – b

Portrait of a Finnish family. In his diary Evans described photographing such a group: ‘At Rungam, where we once more crossed the river Kemi, I tried taking a photograph of a large group of Finns, & actually succeeded in getting them to sit, but when the process had begun, the little ones began to move about, & the elders to arrange their caps & hair, so the attempt has failed.’ Photograph by Arthur Evans. August 1873. (Copyright Pitt Rivers Museum, University of Oxford. Accession Number: 1941.8.70)

View of buildings at Sodankylä, captioned ‘Finnish homestead’, showing a storehouse for fuel and loft containing winter clothing, etc. ‘One of the peculiarities of Sodankylä is that, though it is a small village collectively, to see it all you have to do as much walking as in a large town, for some of the houses are over a mile distance from any of the others. The town boasts one shop or store, where you can get anything from bread to boots & from Finnish spelling books to English knives.’ Photograph by Art

Spoon made of reindeer antler carved with Saami decorations, one of eleven similar spoons collected by Arthur Evans and donated to the Pitt Rivers Museum by Joan Evans in 1941. (Copyright Pitt Rivers Museum, University of Oxford. Accession Number: 1941.8.10)

Hand-coloured studio portrait of a Saami woman, identified as a wife (or married woman), standing, wearing a distinctive hat, described on the printed caption as being from Karasjok in Finnmark, Norway. Photograph by the Marcus Selmer studio. Bergen, Norway. Circa 1873. (Copyright Pitt Rivers Museum, University of Oxford. Accession Number: 1941.8.27)

Hand-coloured studio portrait of a Saami man, standing, wearing an animal skin jacket and a distinctive hat, identified in a handwritten note as being from Luleå, Sweden. Photograph by the Rosalie Sjöman studio. Stockholm, Sweden. Circa 1870s. (Copyright Pitt Rivers Museum, University of Oxford. Accession Number: 1941.8.38)

Lithograph produced in Berlin by Hermann Delius, published in 1841, showing a group of five Saami people, one of whom carries a baby, with the old wooden church at Arvidsjaur depicted in the background. (Copyright Pitt Rivers Museum, University of Oxford. Accession Number: 1941.8.117)

Lithograph produced in Berlin by Hermann Delius, published in 1841, showing a view of the ancient Saami settlement of Lycksele, Sweden, with its wooden church visible at the centre of the image. (Copyright Pitt Rivers Museum, University of Oxford. Accession Number: 1941.8.113)

Faces of people encountered on a voyage through Bosnia and Herzegovina: ‘Here is a Greek Christian girl that we saw at a well, and who graciously allowed us to slake our thirst from the bucket she had just drawn up.’ The delicate portraits show the aforementioned (Christian) Bosniak girl encountered near Derventa (bottom left), a Croat girl at Sisak (centre), and a man from Slavonia seen at Gradiška (right). Drawings by Arthur Evans. August 1875. (Copyright Pitt Rivers Museum, University of Oxford. Accessio

Pencil sketch of two men sitting beneath the porch of a thatched building, identified as Bulgarians at a small Bulgarian settlement in Maksimir Park on the outskirts of Zagreb, Croatia. One of the men is tying bunches of onions, preparing the crop for sale in the market. Drawing by Arthur Evans. August 1875. (Copyright Pitt Rivers Museum, University of Oxford. Accession Number: 1941.8.184)

Title page of Arthur J. Evans, Through Bosnia and the Herzegovina on Foot during the Insurrection, August and September 1875 (2nd edn., London: Longmans, Green and Co., 1877). 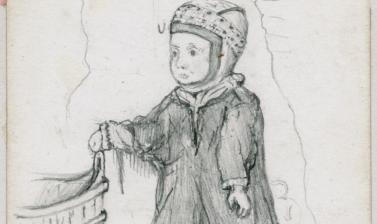 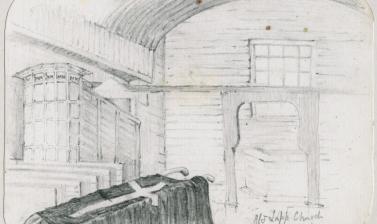 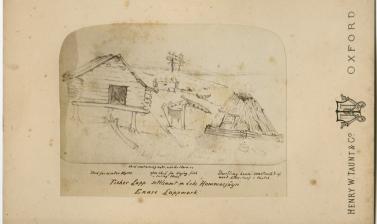 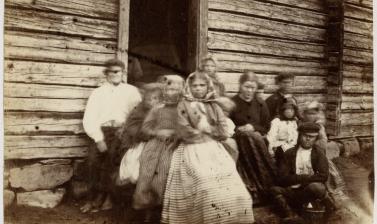 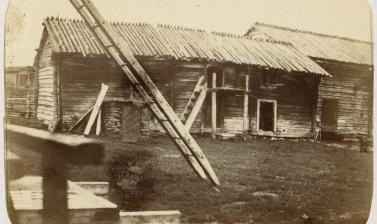 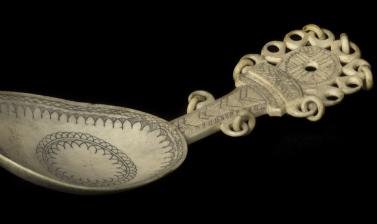 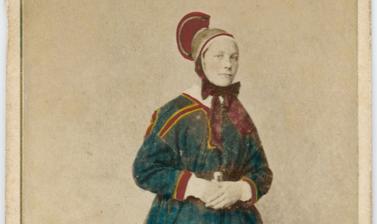 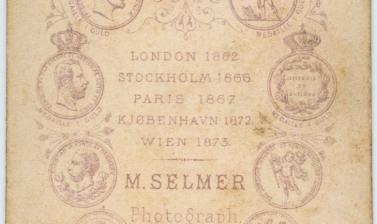 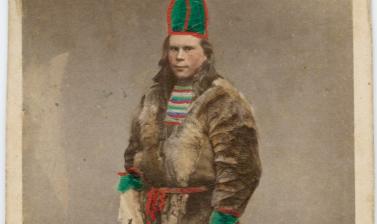 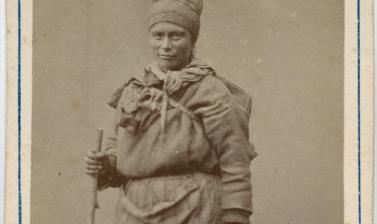 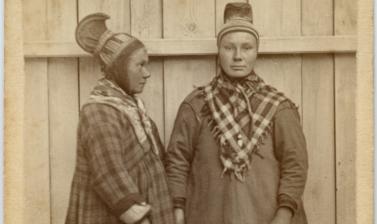 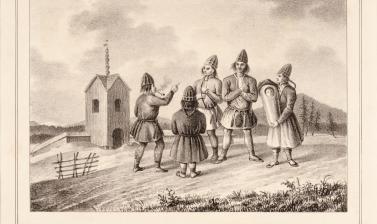 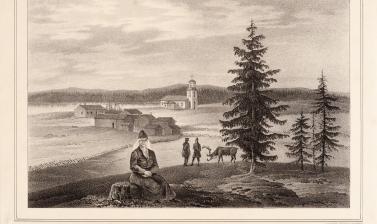 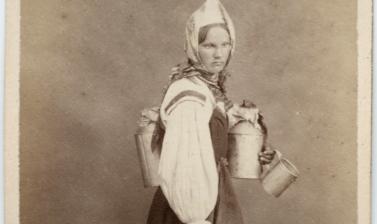 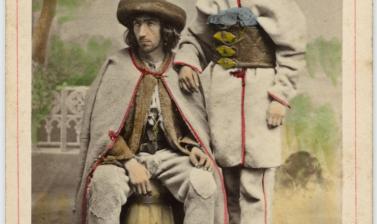 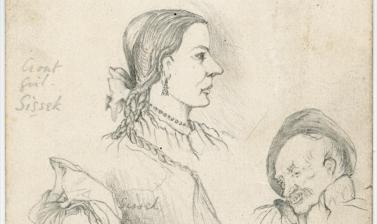 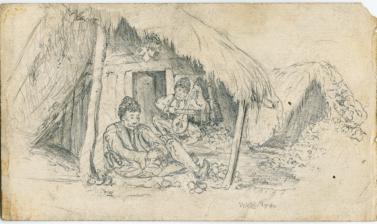 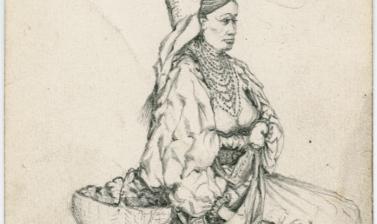 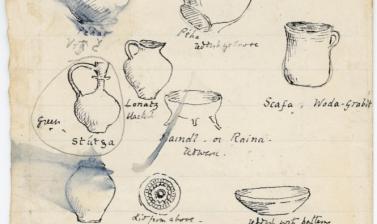 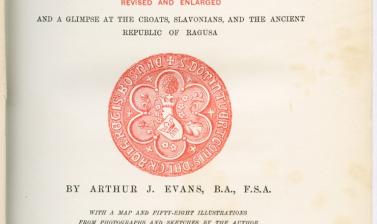 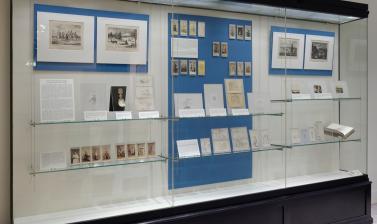