The Maasai Living Cultures Project started in 2017 when Samwel Nangiria visited the Pitt Rivers Museum as part of an Indigenous Leadership programme organised by the NGO Insightshare. Over the course of three years, three visits by Maasai representatives from both Kenya and Tanzania have taken place. During these visits, the delegates expressed their concerns about the presence of 5 of the 188 objects in the Museum and indicated that without spiritual intervention their continued presence in Oxford would cause great concern. We are awaiting further guidance from the Chief Laibon (spiritual leader) of the Maasai, Laibon Mokompo Ole Parit, on this issue and to find ways forward with the Maasai community. Conversations have also started about the way the Museum speaks about the Maasai in its displays, databases and education programmes.

In November 2017 and 2018, Maasai delegates visited the Museum to discuss the care of their objects, following their statement that they were concerned and “annoyed, annoyed, annoyed” about the objects’ presence in the Museum, framing Maasai culture as though it was in the past. In fact, Maasai groups in Kenya and Tanzania are actively resisting the erosion of their land and culture.

In 2019, with support from the Staples Trust, consultations were held within the Maasai community across Tanzania and Kenya through video screenings and discussions with elders, and through the use of radio and media engagement. As a result, around 70% of the Maasai community were informed of the collaboration, helping to strengthen relationships across borders and ensure different views on ways forward were taken into account. Crucially, a new regional network has emerged, the Pan-African Living Cultures Alliance, enabling more communities to document, through the use of participatory video, their knowledge systems, cultural systems, crafts, languages and traditional technologies. 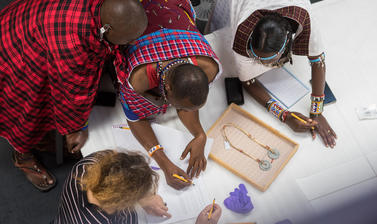 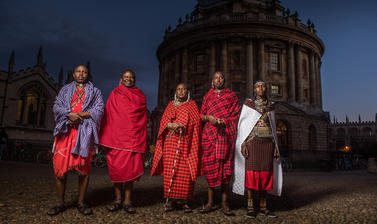 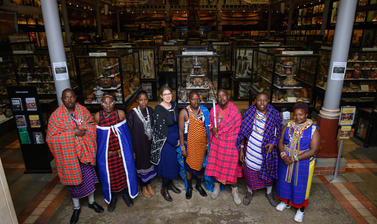 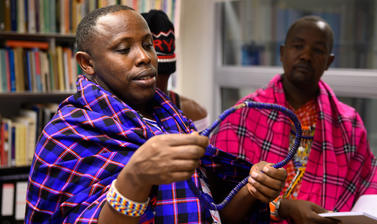 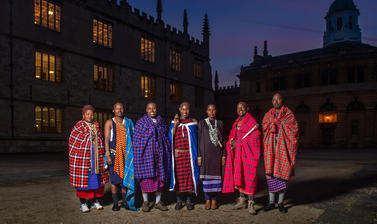 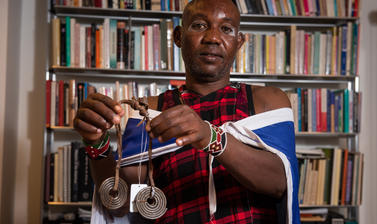 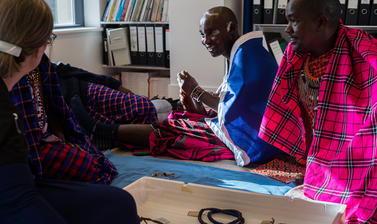 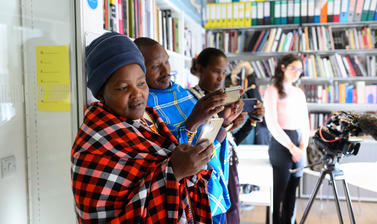 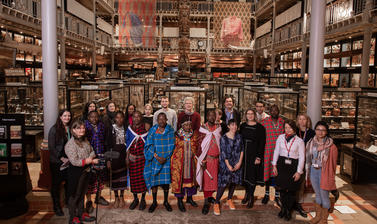 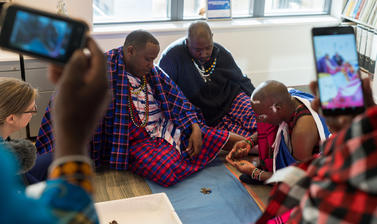 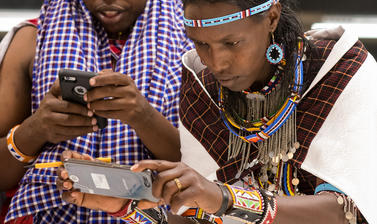 In January 2020 seven representatives from Kenya and Tanzania, including the Maasai spiritual leader Lemaron Ole Parit, came to Oxford to give further spiritual guidance and further meetings are taking place in Tanzania and Kenya with chief Laibon Mokompo Ole Parit.

During the visit, one of the largest cross-national delegations of Maasai leaders to come to the UK, more museums joined the conversation, expanding the scope of the project, and the fortnight-long visit of the Maasai delegates included visits to the Horniman Museum, London, and the Museum of Archaeology and Anthropology in Cambridge.

The principal aim of the 2020 visit was to receive spiritual guidance from the Maasai Laibon Mokompo, through his son and Laibon in training, Lemaron and the Enkidong  (a calabash considered sacred, filled with small white, black and colourful stones and marbles used to communicate with the ancestors) that he brought. For a Laibon to travel with the sacred Enkidong was a unique occasion, as the Enkidong had never left Kenya before.

Key to the future of the project is the development of relationships of trust between stakeholders and a continued openness with regards to the different possible avenues for redress.

2018: Samwel Nangiria was accompanied by Yannick Ndoinyo, a junior elder from Ololosokwan, Tanzania and Executive Director of The Eastern Serengeti Trust (TEST), a non-profit organization. Kuweya Timan Mollel, a women’s rights champion with long term experiences in mobilizing women to effectively participate in decision-making at the family and other levels; member of Soitsambu village council for 8 years and chairperson of Pastoral Women Council as well as a member of Oltoilo le Maa group. Francis Shomet Ole Naingisa, custodian of the Maasai culture through the Ilkitoip Age Group and lecturer on the Maasai cultural anthropology for international honours programme students from Boston University and Scholastica Ene Kukutia, a Maasai women rights’s activist from Kenya

2020: Samwel Nangiria; Yannick Ndoinyo, new delegates were Lemaron Ole Parit, the son of Mokompo Ole Simel, great grandchild of Senteu and one of the chief spiritual leaders of the Maasai. Amos Karino Leuka, member of the Loita council of elders, a teacher and long-time activist in cultural leadership and against the practice of Female Genital Mutilation. Juliana Naini Mashati from Morijo, Kenya, founder of Maasai Treasures, an organisation supporting women through the craft of beadwork in Morijo. Evelyn Paraboy Kaney, business transformer from the Ilparakuyo Maasai community in Southern Tanzania, with an Masters of Business Administration from the University of Mary in Fargo, North Dakota, USA.  And James Meipuki Ole Pumbun, an elder from the Loita Maasai community in Kenya who is an advisor to his age set traditional leader on matters of cultural security. Media coverage of the visit includes Kenyan media, local media and an article in The Economist, examples of which are listed below. The live stream of the public event, where local community members and stakeholders were invited to meet with the Maasai delegation in Oxford was watched by 16,000 people worldwide.

As an innovative collaborative project, Living Cultures has received extensive local, national and international media coverage. We hope it will continue to function as an example of decoloniality and self-representation.