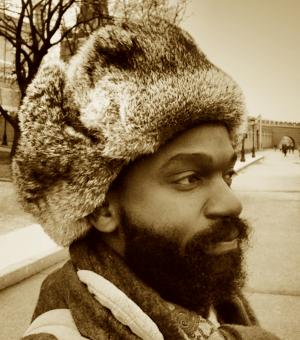 Dr Samson Kambalu is an Associate Professor of Fine Art the Ruskin School of Art and a fellow at Magdalen College.

Samson is an artist and writer working in a variety of media, including site-specific installation, video, performance and literature. His work is autobiographical and approaches art as an arena for critical thought and sovereign activities. Born in Malawi, Kambalu’s work fuses aspects of the Nyau gift-giving culture of the Chewa, the anti-reification theories of the Situationist movement and the Protestant tradition of inquiry, criticism and dissent. He has developed a praxis around Cinema which includes site specific installations, lectures and intervention on social networking sites online. His PhD at Chelsea (UAL) Nyau Philosophy: Contemporary Art and the Problematic of the Gift – a Panegyric, examined gift-giving theory from a contemporary art and Nyau perspective of non-linear time.

Kambalu’s writing has included “The Museum and the Individual’, for the Tate, looking at aspects of the gift economy in Meschac Gaba’s Museum of Contemporary African Art. His first book, an autobiographical novel of his childhood upbringing in Africa, The Jive Talker, was published by Jonathan Cape in 2008 and went on a performative reading tour around Europe. Kambalu has been featured in major exhibitions and projects worldwide, including the Dakar Biennale (2014, 2016), Tokyo International Art Festival (2009), and the Liverpool Biennial (2004, 2016). Kambalu has won research fellowships with Yale University and the Smithsonian Institution, and was included in All the World’s Futures, Venice Biennale 2015, curated by Okwui Enwezor. His recent solo exhibition is at the newly inaugurated Zeitz Mocaa, Cape Town (2017).