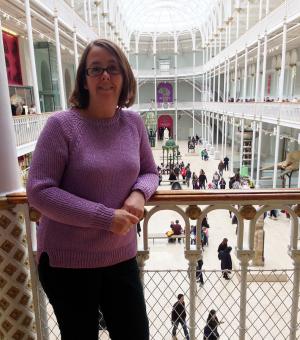 Alison Brown holds a Personal Chair in Anthropology at the University of Aberdeen, Scotland, where she also holds an honorary Curatorial Fellowship with the University Museums and is Director of the Museum Studies graduate programme. She studied history as an undergraduate at the University of Aberdeen, and followed this with a postgraduate diploma in Museum Studies at the University of Leicester, an MPhil in Social Anthropology from the University of Cambridge, and a D.Phil. in Social Anthropology from the University of Oxford.
Since 1998 she has carried out fieldwork in Canada and the United States, primarily with the Blackfoot nations of Siksika, Piikani and Kainai, on projects concerning representation, access and the revival of cultural histories using museum collections as a focus. This work has involved collaborations with the Pitt Rivers Museum, the Museum of Archaeology and Anthropology at Cambridge (MAA), and the Royal Albert Museum in Exeter. She has also worked on collections associated with the fur trade in Scottish museums and family homes, which has involved fieldwork in archives and museums, as well as oral history work in northern Manitoba, northern Scotland and Orkney. Most recently, she has worked on issues of cultural revitalization, narrative and silence in the Russian Far East with University of Aberdeen colleague, Tatiana Argounova-Low. This research has concerned a unique mammoth ivory model of yhyakh, the Sakha summer festival, housed in the British Museum and which was loaned to the National Museum of the Arts, Yakutsk, Sakha Republic (Yakutia) in 2015, where it became the focus of local arts and heritage projects.
Before returning home to Aberdeen, Alison held curatorial and research positions at the MAA, the Pitt Rivers Museum, and was Research Manager for Human History at Glasgow Museums.