In 2010, five historic Blackfoot hide shirts travelled from the Pitt Rivers Museum to Alberta, Canada, for handling workshops with Blackfoot people and exhibition in two museums. Prior to this, the shirts required extensive conservation work to prepare them for the journey.

Detail of hairlocks on shirt (1893.67.1) showing membrane under quills 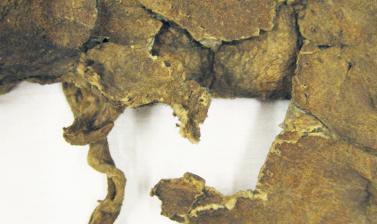 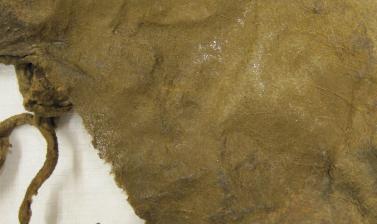 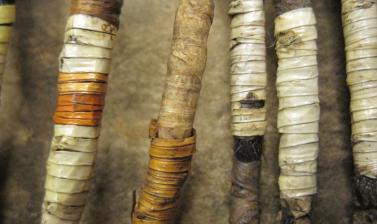 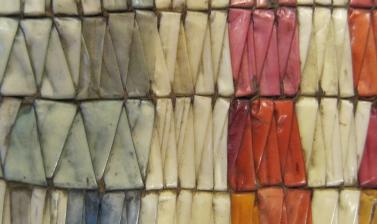 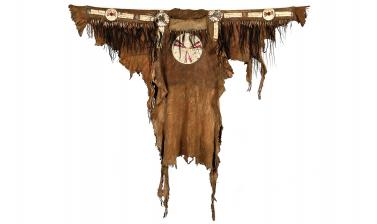 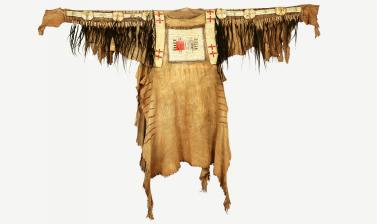 The shirts were gifted to Sir George Simpson, Head of the Hudsons Bay Company, in 1841. Simpson's secretary, Edward Hopkins, kept the shirts first in Montreal and then at his home near Henley-on-Thames, Oxfordshire, from where they entered the Museum collections in 1893 on Hopkins' death.

The hide shirts are examples of traditionally made garments and use very little traded material in their manufacture. Four are decorated with porcupine quills coloured with traditional plant and mineral dyes. Three have horse and human hairlocks. Two contain small amounts of the red wool trade cloth commonly referred to as 'Stroud', after the English town where it was made. One shirt is decorated with painted motifs depicting the owner's war deeds. Another shirt, which is completely undecorated and of unevenly tanned hide, is thought to be a rare example of everyday wear. All the shirts are sewn with sinew thread.

Condition assessments were made for each shirt, and similar problems were found. The shirts are thought to have been displayed in the Hopkins' homes and were heavily soiled with what we believe to be coal soot. The trailing sections of hide are very brittle and prone to damage. The quills have sustained damage from insects, and the neck openings through use.

All of the shirts show evidence of past repairs. Some of these are beautifully sewn using sinew thread, and are believed to be repairs made by the originating community. Several repairs had been very poorly sewn with cotton. These could be post-collection but pre-Museum repairs, or carried out in the Museum before conservation record-keeping began.

Prior to commencing any physical treatment, the conservators spent several days studying the shirts with Blackfoot ceremonial leader Adam Pard, during which time conservation treatment options were discussed. The presence of human hair means Blackfoot people consider these shirts sacred. The Blackfoot consultant carried out a smudging ceremony, which included blessing and painting the conservators with red ochre in fat to protect them while working on the sacred shirts. Female staff also agreed not to handle the sacred shirts while menstruating to respect Blackfoot protocols.

First, the hide of each shirt was gently cleaned with smoke sponge. The shirts had been removed from the Balckfoot community for 170 years and the team unanimously felt it was disrespectful to return sacred objects covered with soot. The pigments were firmly fixed and none appeared to be removed with the cleaning process.

The quillwork panels were stabilised and gap-filling was used where nescessary for structural reasons, most commonly on quillwork panels running over the shoulders, where they were subjected to the most movement. The fills were made with a synthetic material coloured to match the surrounding area.

Detached pieces of hide were reattached and weak areas strengthened by backing with a polyster suport fabric using with heat-activated adhesive. This is reversible when heat is reapplied. This was one of the techniques approved by the ceremonial leader during the consultation period. The neck of one shirt was damaged so severely that a technique using needle-felted wool was adapted to support a large gap.

Detailed study of the shirts provided the Blackfoot community with information that had been lost over time. Where the quills had been partially lost around the top of the hairlocks, what appeared to be a membrane could be seen. It is presumed that the membrane was applied while moist and flexible, and would then contract as it dried to form a tight binding and basis for the quills. It was also noted that elements of the quillwork panels were constructed using a brown plant fibre in place of porcupine quills. This was identified as bulrush (Typha latifolia).

The combined conservation treatment time to prepare all five shirts for travel was 303 hours.