Working with the Haida people

https://www.youtube.com/embed/UNwIPfcGzPk
move to "Working with the Haida people" content

Working with the Haida people

The Pitt Rivers Museum’s collections of historical material from Haida Gwaii are an important resource for Haida people today. The Museum has developed an ongoing relationship with the Haida Nation and the Haida Gwaii Museum to provide access to heritage items for Haida people, and to better understand the objects in its care.

Two Haida carvers, Gwaai and Jaalen Edenshaw, worked in the Museum for a month in September 2014 to make an exact replica of the ‘Great Box’. This process taught them about the original artist’s technique and design. They were then able to bring this knowledge and practice home.

Learning from the Masters: the Great Box Project from Pitt Rivers Museum on Vimeo.

The Great Box - Learning From Our Ancestors from Rivers Museum on Vimeo.

The Great Box project grew out of an existing partnership with the Haida people that began in September 2009 as part of the ‘Haida Material Culture in UK Museums project’.

As part of this project, 21 delegates from the Haida First Nation travelled to the UK to form an international research network with the Pitt Rivers Museum and the British Museum. During their time in the UK, the delegates handled nearly 800 Haida treasures, and gave carving and weaving demonstrations, public talks, and public dance performances. The project sought to understand the importance of historic collections for indigenous communities, to improve the latter's access to collections, and to learn together about the collections. Most importantly, its goal was to build long-term relationships between Haida people and museums in the UK holding Haida treasures.

Everything Was Carved from Pitt Rivers Museum on Vimeo.

This video, ‘Everything Was Carved’, features commentary from Haida delegates and Pitt Rivers Museum staff, as well as footage from the handling sessions. It was produced as a teaching tool, with students and source community researchers in mind: it helps convey the breadth of preparations, outcomes, meanings and perspectives inherent in projects of this kind. It can be streamed or downloaded for educational use.

This is Our Life: Haida material heritage and changing museum practice 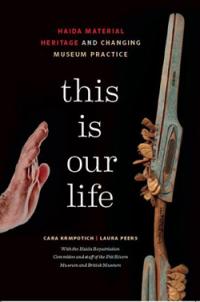 The project resulted in a book, This is Our Life: Haida material heritage and changing museum practice (UBC Press, 2013), by Cara Krmpotich and Laura Peers.

Featuring contributions from Haida people – weavers, carvers, language speakers, youth, and Elders – and museum staff – curators, conservators, and collections management staff – who participated in the project, and a rich selection of illustrations, This Is Our Life details the remarkable story of the Haida Project, from the planning to the visit itself and through the years that followed.

This research network was supported by the Leverhulme Trust (International Networks Grant), the John Fell Fund (University of Oxford), the Gwaii Trust, and the Canada Council for the Art.

Find out more about the Museum's Haida collections

Sketchbook inspiration and information about the Museum's Haida collections

Want to find out more about our ethnography and archeology collections?